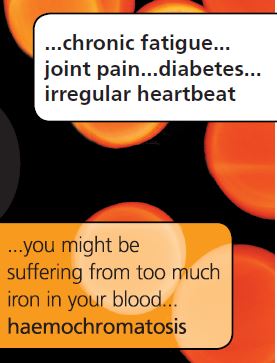 Haemochromatosis, or iron overload disorder, is a condition where the body contains too much iron. This is usually because of an inherited faulty gene that causes you to absorb excess amounts of iron from food.

Iron is an essential mineral for our body (see box). Normally, our body monitors our daily need for iron and absorbs it from food in the required amounts. People with haemochromatosis have a fault in this control process. Over time, they absorb and accumulate too much iron in their body.

After a while, if haemochromatosis is left untreated, the body starts to deposit the extra iron in other areas of the body. It usually gathers around organs, such as the heart and liver.

Once the iron starts building up, it causes uncomfortable symptoms, such as nausea, abdominal (tummy) pain, constipation and joint pain (see Haemochromatosis - symptoms for more information). It can lead to liver damage, heart failure and diabetes if left untreated.

There are two types of haemochromatosis:

Who is at risk

Haemochromatosis is now recognised as one of the most common genetic disorders in the Ireland. Research has shown that as many as 1 in 100 people are likely to be at risk of developing iron overload.

Iron build-up can take many years. Men usually show symptoms before women, because women regularly lose blood (and therefore iron) during their period.

Haemochromatosis can be diagnosed by a blood test. Once confirmed, it is important to start treatment as soon as possible to avoid more iron build-up. Treatment involves removing blood, in a method similar to blood donation, to lower your iron levels

As long as treatment starts as soon as possible, the body's iron stores should return to a normal level and symptoms will improve. Life expectancy should not be affected if the condition is treated before excessive build-up of iron occurs.

However, treatment for haemochromatosis will not cure any other conditions that may have resulted from iron overload, such as cirrhosis and diabetes.

Role of iron in the body

The main role of iron in the body is to help transport oxygen in the blood to the vital organs. Iron combines with a protein in the red blood cells to form a substance called haemoglobin.

When we breathe in, the oxygen in our lungs is attracted to the iron in haemoglobin and combines with it to form oxyhaemoglobin. This is transported around the body by the blood cells, and oxygen is released wherever it is needed.

It can be very difficult to identify haemochromatosis from symptoms alone because they are often mild and could be symptoms of other conditions.

The main symptoms are:

Men may also become impotent and have trouble getting and keeping an erection. Women may stop having periods, which can be a vital first sign of haemochromatosis.

As haemochromatosis develops, symptoms get more severe and can develop into other conditions, such as:

Normally, our body maintains a steady level of iron in the blood. There are not many ways for the body to dispose of iron, so levels are mostly controlled by the body regulating how much iron is absorbed from food, such as red meat and spinach.

The amount of iron we absorb from food varies according to our body's need for it.

People with haemochromatosis cannot control the levels of iron in their bodies in this way. As a result, iron builds up over time and is usually deposited in the liver, pancreas, joints, heart or endocrine glands.

Causes of both primary and secondary haemochromatosis are outlined below.

Primary haemochromatosis is an inherited condition caused by a mutation (fault) in a gene called HFE.

Everyone receives two sets of genes; one from their father and one from their mother. If a person receives a set that includes the mutated HFE gene, they will not develop symptoms but they will be a carrier of haemochromatosis.

If they have a baby with somebody who is also a carrier of haemochromatosis, there is a significant chance that the baby will receive two sets of mutated genes and develop haemochromatosis.

The likelihood of the child being affected is as follows:

As well as HFE, there are other genes known to be involved in iron absorption, and research is ongoing in this area. Nine out of 10 people with genetic haemochromatosis inherit the defective HFE gene.

Secondary haemochromatosis occurs as a result of another factor; usually a blood condition. Possible causes include:

It can be difficult to diagnose haemochromatosis as many of the typical symptoms can also result from other conditions.

In most cases, your GP will refer you to a specialist in liver or heart disorders, who can then diagnose the condition.

Haemochromatosis is usually diagnosed through blood tests, which may include:

Sometimes, a liver biopsy is needed. This involves taking a small sample of liver tissue to detect the amount of liver damage caused by iron overload.

If you are diagnosed with primary haemochromatosis, it is likely that close members of your family may also need to be tested for the condition.

Haemochromatosis is treated by a method known as venesection or phlebotomy, which involves removing iron-rich blood from the body.

Phase 1: initially, venesection will be performed often, usually around once a week. This treatment schedule will continue for a year or more, depending on the amount of iron build-up. During this time, the levels of stored iron in your body will be monitored. Treatment will continue until your body has minimal iron stores.

Phase 2: after your stores have been depleted, you will go into a second phase of treatment. Iron will continue to build up gradually, so your iron levels will have to be continually monitored. It is likely that you will need to have venesection treatment every few months to keep your iron levels low.

Venesection will help to improve some of the symptoms of haemochromatosis, such as fatigue, nausea and abdominal (tummy) pain. However, more severe symptoms and conditions caused by iron build-up, such as cirrhosis, cannot be reversed through venesection.

In some cases, primary (genetic) haemochromatosis can also be treated by a drug that binds iron and allows it to be excreted from the body.

If haemochromatosis is diagnosed before excessive build-up of iron occurs, it is not thought to affect life expectancy.

If you have the haemochromatosis gene, there is little that you can do to prevent iron build-up. However, there are steps you can take to minimise your intake of iron:

Content provided by NHS Choices www.nhs.uk and adapted for Ireland by the Health A-Z.