The HSE National Standards for Bereavement Care following Pregnancy Loss and Perinatal Death clearly define the care parents and families can expect to receive following a pregnancy loss or perinatal death. The standards will be implemented and applied across the health service in all appropriate hospitals and settings.

The first of its kind in Ireland, pregnancyandinfantloss.ie will be a  valuable resource for parents who experience pregnancy loss or perinatal death and the health care professionals who care for them. The website provides information on a sensitive subject, shares the latest research into the causes of baby loss, and promotes emotional well-being and support services.

Supported by funding from the Irish Hospice Foundation, the website is an initiative of the Implementation Group for the National Standards for Bereavement Care Following Pregnancy Loss and Perinatal Death.

The standards are built around four central themes

The standards have been developed by an expert working group including representatives from obstetrics, midwifery, psychiatry, paediatrics, social work, chaplaincy and the Irish Hospice Foundation. Their extensive work was informed by a national audit of bereavement services in maternity units, an extensive public consultation process that yielded 164 submissions, consultation with practitioners and voluntary support organisations that support parents and families as well as the development of the new National Maternity Strategy and the draft HIQA Maternity Standards. 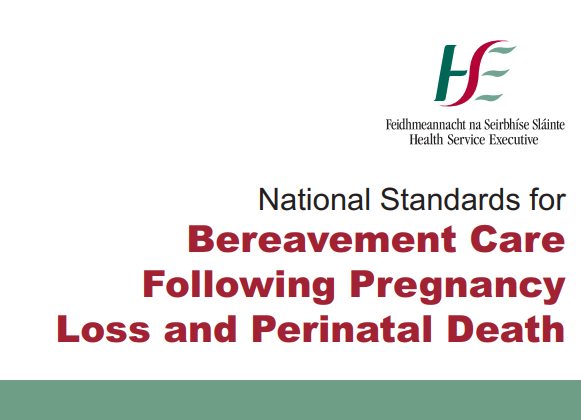