The HSE National Clinical Programme for Early Intervention in Psychosis is a joint initiative between the HSE and the College of Psychiatrists of Ireland. Psychosis is a broad term used to describe a state of mind in which delusions, hallucinations, or grossly disordered thinking are experienced while in a fully conscious state. Each year in Ireland an estimated 1,500 people develop a psychotic disorder for the first time.

Video: The National Clinical Lead for Psychosis explains the Programme and the importance of early intervention. An actor from UCC Drama Society recounts the story of a young person experiencing psychosis for the first time, being frightened, accessing specialist psychosis service and beginning the road to recovery and returning to college. Names and dates have been changed.

Scope of the National Clinical Programme:

For the purposes of this Model of Care, FEP is defined as the first episode of moderately severe psychotic symptoms (i.e. hallucinations and / or delusions with / without thought disorder) lasting for at least seven consecutive days and leading to distress or disruption to functioning.

This includes psychoses of all causes including bipolar psychoses and other affective psychoses as well as psychotic episodes associated with psychoactive substance use. However, confirmed organic psychotic disorders are excluded if they can be more appropriately managed clinically by medical services.

The key overall aims of the HSE National Clinical Programme for Early Intervention in Psychosis (EIP): 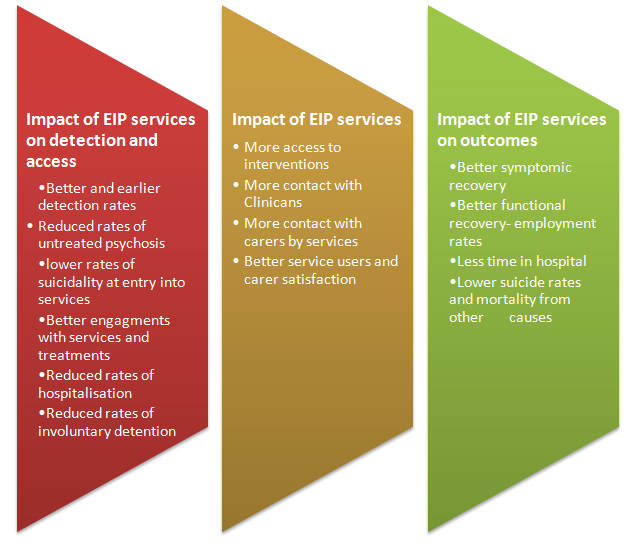